Why do corals release mucus?

Corals are known to release mucus from their body into the water. But why do they release mucus? Look at the above picture. When I expose corals to air, they release slimy mucus. In a natural environment, corals can be exposed to air during extremely low tides, experiencing high temperature and dryness under strong sunlight for a couple of hours. 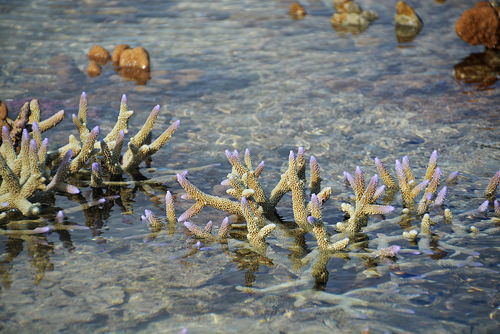 In a natural environment, corals can be exposed to air during extremely low tides.

You will see a copious amount of mucus released from the corals, which is a defense mechanism against desiccation. Corals coat their body with mucus, keeping in moisture to withstand severe environmental conditions.

Corals also release mucus under submersed conditions for several reasons. Here, I summarized the reasons (see table below). Generally corals release mucus under stressed conditions such as defense against biofouling, pathogens, UV radiation, sedimentation, pollutants, and desiccation. Even water currents and temperature or salinity changes can be a cause of mucus release.

Speaking of UV, coral mucus contains substances called mycosporine-like amino acids that can absorb UV light, which can protect corals from strong UV light. When sediments (for example, silt and sand) fall down onto the coral surface, corals use mucus to clean up their surface. 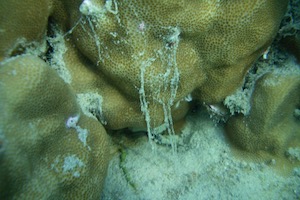 Corals use mucus to remove sediments

Corals also release mucus under non-stressed conditions. They use mucus as a tool to capture prey items such as bacteria and small zooplankton with their sticky surface. Corals transport the food items trapped by mucus into their mouth using ciliary movements (Lewis & Price 1976). Corals are also known to release mucus as excretory pathways for excess organic matter (Tanaka et al. 2009).

The origin of mucus comes from zooxanthellae, a symbiotic algae (Meikle et al. 1987). Studies show that corals release approximately half of the photosynthetic products (organic matter) provided by zooxanthellae into the water in the form of mucus, while they use the rest of the organic matter for growth and respiration (Crossland et al. 1980, Davies 1984, Muscatine 1984). The coral mucus is primarily consisted of sugar-protein, called mucin, and polysaccharides and lipids. Coral mucus used to be defined by various terms such as fluid mucus, string, web or flocs, and mucous sheet. 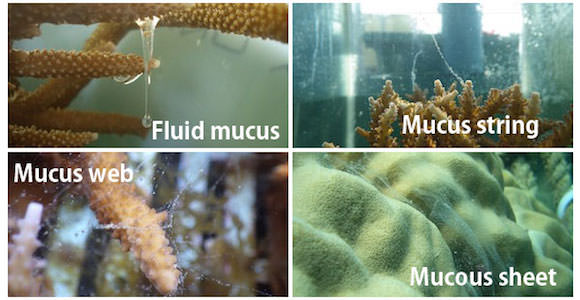 Nowadays, however, mucus is commonly separated by the difference in size from a quantitative perspective, that is POM (particulate organic matter) and DOM (dissolved organic matter). DOM is technically defined as organic matter that can pass through filters with a pore size of 0.7-1.0 micrometer.

The size of organic matter strongly affects subsequent pathways. For example, DOM in reef waters is mainly taken up by heterotrophic bacteria and incorporated into the microbial food web. On the other hand, the larger POM is utilized by reef fishes, zooplankton, benthic animals; it also partially sinks down and is mineralized in the sediments. Therefore, information about the sizes of the organic matter produced by corals is important for understanding the subsequent biological availability and carbon pathways.

Now let’s look at DOM and POM production by corals. Look at the next figure. This figure is the summary of release rate of DOC and POC by various corals (as of 2014). The x-axes indicate reference sources. As you can see, both DOC and POC release rates vary greatly, ranging from -120 to 680 nmol/cm^2/h for DOC, and from 3 to 170 nmol/cm^2/h for POC. It’s not even easy to estimate the averaged values! 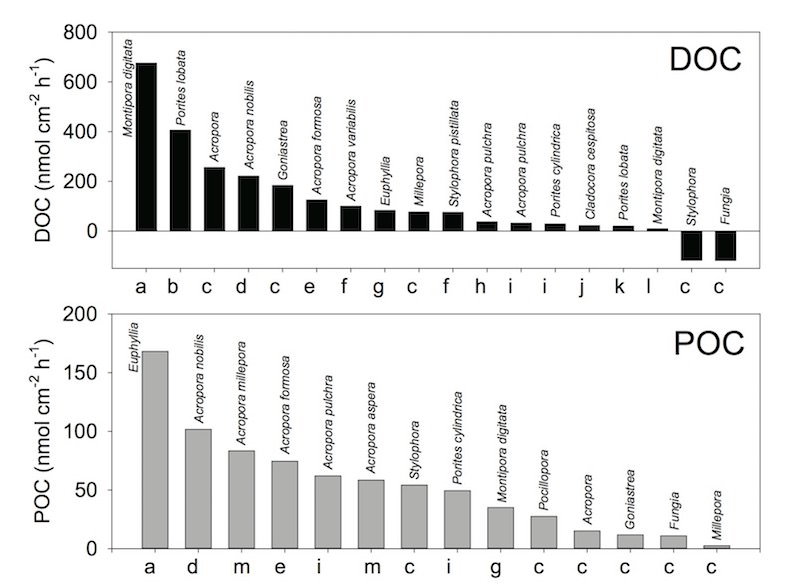 When you measure the production rates of organic matter released by corals, usually the corals are incubated in a closed system like beakers or bottles for a certain period of time (such as several hours). Now, look at this table (below). Many conditions differ among these types of cultural experiments, including incubated medium volumes, incubation times, type and intensity of provided lights, seawater temperature, and the stirring conditions of the medium.

For example, higher light intensity could increase the photosynthetic rates of zooxanthellae in corals, which increases the release rates of DOC and POC from the coral colony (Naumann et al. 2010). Higher nutrient concentrations in seawater might reduce DOM release rates because the production of zooxanthellae cells is promoted with nutrients and less organic matter is available for release (Tanaka et al. 2010). These differences in experimental conditions among studies might cause the large ranges of POC and DOC release rates (Nakajima & Tanaka 2014).

You can see a pattern of DOM and POM release by corals, however, when you look at the studies measuring both DOM and POM release simultaneously. Generally, corals release more DOC than POC into the water. Approximately, 60-90% of organic carbon is released as dissolved form (Naumann et al. 2010). So the majority of organic matter released by corals would be mainly utilized by bacteria.

The DOM produced by corals is rapidly decomposed and mineralized by heterotrophic bacteria. A previous study from New Caledonia showed that only 10-20% of bacterial carbon demand was met by DOC derived from phytoplankton (Rochelle-Newall et al. 2008). This result suggests that benthic organisms other than phytoplankton play a major role in providing DOM to pelagic bacteria. 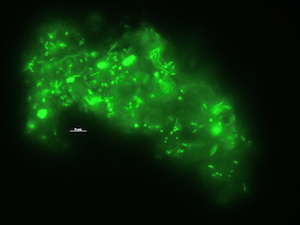 A number of studies have reported that coral mucus enhances the growth of bacteria. For example, my previous studies observed that the bacterial abundance in seawater increased much more quickly with the experimental addition of coral mucus than in the control seawater (Nakajima et al. 2009, Nakajima et al. 2015). So coral mucus functions as a good substrate for bacterial growth. 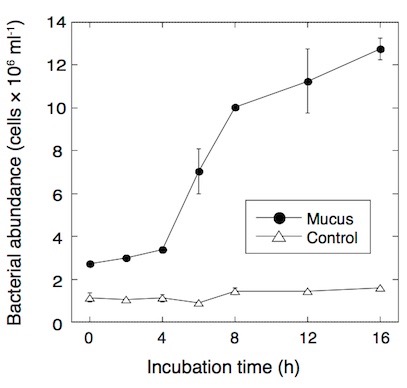 Coral mucus often includes air bubbles that provide buoyancy, which slowly ascend to the sea-surface and accumulate. Passing through the water column, its sticky surface traps various organic particles such as bacteria. So coral mucus contributes to the formation of enriched organic matter and microbes in the air-sea interface. Also, higher coral coverage in an area can mean higher organic matter or coral mucus input, which results in a more stimulated microbial community at the air-sea interface compared to areas with lower coral coverage. 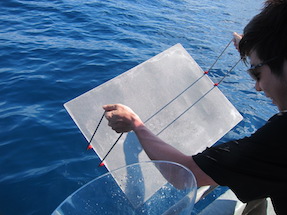 How great is the nutritional values of coral mucus?

Coral mucus is utilized by various reef animals including fish, zooplankton and various benthic animals. Here, I summarized the list of animals that have been reported to feed on coral mucus, which are either isotopically or visually confirmed.

Summary of organisms that feed on coral mucus

Here, I calculated the protein/energy (P/E) ratios of coral mucus using the basic composition of carbohydrates, proteins and lipids of coral mucus from various corals (see Nakajima & Tanaka 2014 for details). 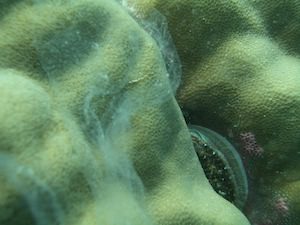 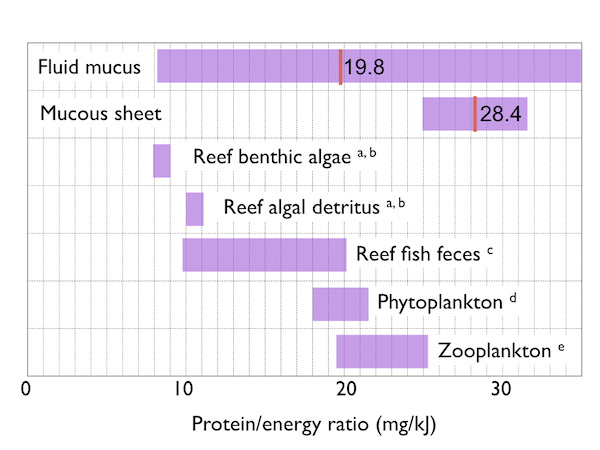 I thank Adi for checking the English of this page. 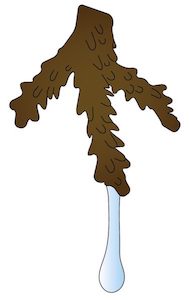