Do you know the sea-surface microlayer?

The sea-surface microlayer is the thin boundary layer between the atomosphere and ocean, with a typical thickness of 10-250 µm.

It is also called ‘surface film’ or ‘surface skin’. The sea-surface micolayer is generally enriched in both dissolved and particulate organic matters and microbes. 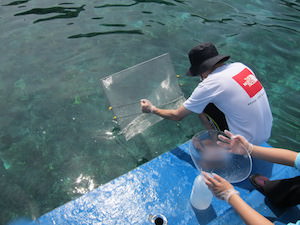 First you immerse the metal screen in the water at an angle and return to the horizontal position underwater, then slowly pulled up.

The metal screen is subsequently drained at an angle to collect the surface samples.

The research team found that the abundance of bacteria and bacterivorous protists were higher in the sea-surface microlayer than the subsurface water, and those in the microlayer increased with increasing coral coverage.

They consider the higher amount of organic matter or mucus released by corals enhanced the number of bacteria and bacterivorous protists.

Because coral mucus often includes air bubbles that provide buoyancy, which slowly ascent to the sea-surface and accumulate.

Passing through the water column, its sticky surface traps various organic particles such as bacteria.

Therefore coral mucus can contribute to the formation of enrichment of organic matter and microbes in the air-sea interface.

A higher coral coverage in an area can mean a higher organic matter or coral mucus input, which may have resulted in a more stimulated microbial community at the air-sea interface compared to areas with lower coral coverage.

What happens after drilling the…