Coral reefs are a hot spot in marine ecological study. Although these ecosystems account for only 0.1% of the world ocean area, their fish production supports ca. 10% of the world’s fish stock.

However, currently over 80% of coral reefs are facing serious decline in coral cover and fish resources. This suggests that elucidating ecosystem function is an urgent issue for this ecosystem.

The journal specified only for coral reefs (i.e., Coral Reefs), is ranked in the top 13 in the aquatic science field (as of July 2017), emphasizing the importance of this narrow, specific ecosystem.

Among the fewer coral reef plankton studies, most of them are either bacterioplankton or phytoplankton, which are “relatively” easy to handle, and further fewer studies have been done for zooplankton, although they are one of the important key players in the lower trophic levels in coral reefs.

Therefore, zooplankton is recognized as a “black box” among many scientists working on coral reefs. In fact, the International Coral Reef Symposium (ICRS), or the so-called “Olympic games of coral reefs,” were held in Hawaii this year (June 2016), where there was only one zooplankton ecology paper presented among more than 2,000 papers.

Yet, zooplankton play a significant role in trophodynamics, serving as one of the important food sources to various reef fish and benthic planktivorores including corals.

Approximately half of the benthic animals on coral reefs are filter feeders, or particle feeders, which feed on zooplankton and particulate organic matter. Even larvae and juveniles of many species of reef fishes grow by feeding specifically on zooplankton. 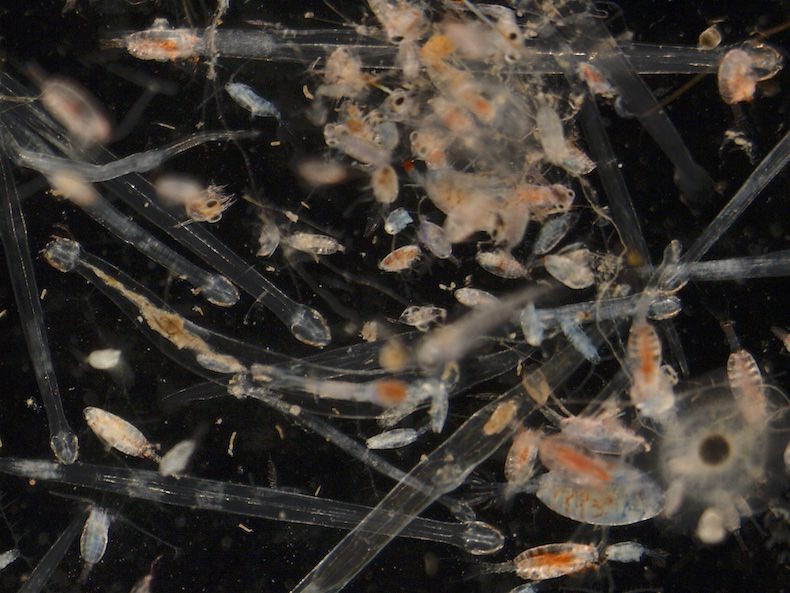 Example of zooplankton collected by a plankton net

This paradox has been discussed in previous studies, but they all are fragmentary and rather qualitative, and thus comprehensive and quantitative studies were required to elucidate planktonic trophic structure in coral reef ecosystems.

They clarified that the grazing food web (phytoplankton), alone, did not satisfy the requirement of mesozooplankton throughout the year. Alternatively, the contribution of the microbial food web was important. Yet, the combined production from both food webs did not satisfy the mesozooplankton requirement in some seasons, emphasizing the importance of detritus in this food-limiting system.

“Detailed investigation on the origin and production of detritus will open the door for better understanding of pelagic trophodynamics in coral reef ecosystems,” Ryota said.