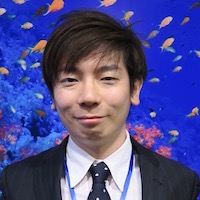 Ryota was born in Tokyo, Japan in 1981. He graduated from Soka University (Tokyo) in 2004 with a B.S. in Bioengineering. In 2009 he received his Ph.D. (Marine Science), also from Soka University. Ryota worked for Soka University as teaching staff from 2009-2012. By becoming interested in the deep-sea, he moved to JAMSTEC, the deep-sea research institution in Japan, as a postdoc researcher. Ryota started his work on coral reef ecology in the Scripps Institution of Oceanography, San Diego, USA in 2016, supported by the Japanese government. He moved back to Japan in 2018 and restarted his work on deep-sea ecology at JAMSTEC. His wife and he have 3 wonderful daughters.

Ryota is a biological oceanographer at JAMSTEC, Japan, with major interests in deep-sea and coral reef ecology.