Ryota and his team monitored the benthic ecosystem at 1,060 m depth of hydrothermally active areas in the Okinawa Trough, off Japan, where a scientific drilling by the Deep Sea Scientific Drilling Vessel Chikyu was performed on September 2010. 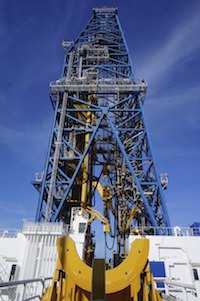 This monitoring was started before the drilling operation and lasted 40 months thereafter.

As a result, it led to elucidate impacts of variation in deep-sea habitats on hydrothermal vent communities.

Prior to drilling, the seabed was covered by soft silty sediment, where Calyptogena clam colonies dominated.

Then, at 11 months after the drilling, drilling-induced hydrothermal fluid discharges and numerous tiny chimneys were observed on the seafloor.

It is presumed that they have been migrated from the nearby habitats.

The previously soft sediment had hardened probably due to chemical reaction of fluid composition, becoming rough and undulated with many fissures after 25 months of the drilling operation.

The image shows how a new ecosystem is formed around the hydrothermal vent areas.